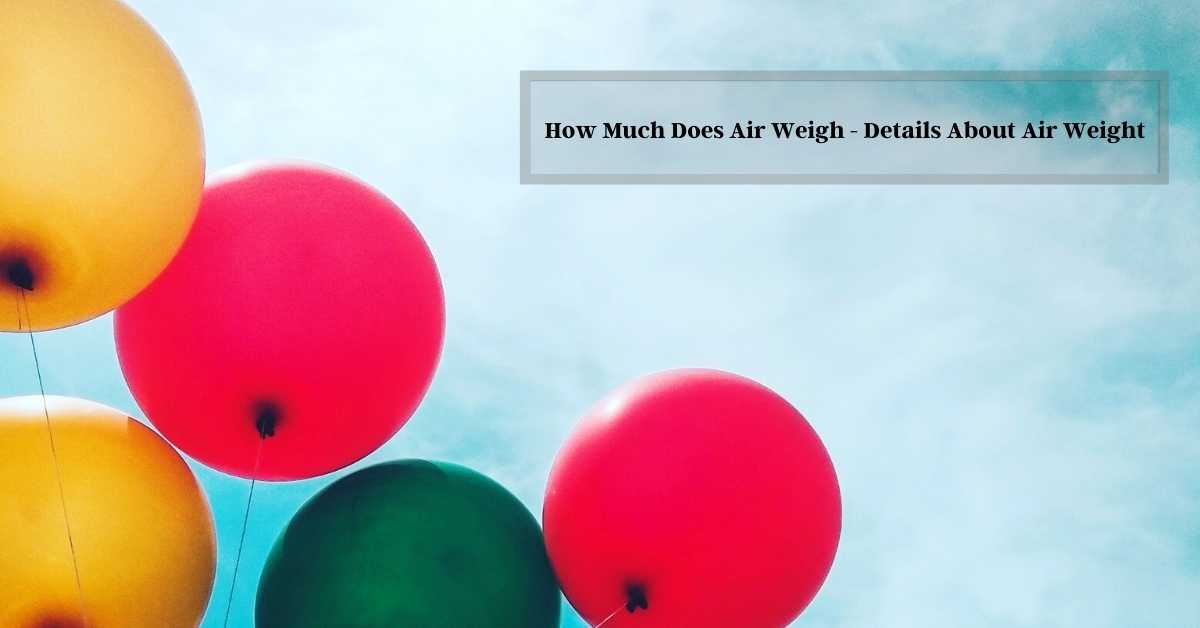 What strange, which we can’t see, can’t smell or touch, but it has weight, and we have to measure this weight. Yes! You are right. We are talking about air weight.

The air has weight ever it becomes heavy. Just take a little example in the brain and see it will look too clear to you. To weigh the air requires two identical balloons, a string, and a dowel. Attach the balloons with the string and hang them on two sites of the dowel. After a while, you see one site is lower than the other side in the dowel. So, it’s easily proven air has mass, which has mass it must weigh.

Generally, natural air is composed of different gases, including nitrogen, oxygen, argon, carbon dioxide, and other small traces of other types of gases and aerosols.

Air is the clear component in the atmosphere, nitrogen has 78%, oxygen 21%, and other gases exist in the natural air.

Earth is fraught in the air. We struggle deep in the Earth’s atmosphere to live, and air Refers to the atmosphere of Earth. Our visible atmosphere is 300 miles thick and weighs 5 quadrillion tons, and the wind is blowing everywhere in the atmosphere.

How Much Does Air Weigh?

Normally, the air weighs 14.7 psi or pounds per square inch at sea level.

Air Presser: We feel air seems light. Some people think air doesn’t have any mass. It constantly pressures down on Earth’s surface. This pressure is called air pressure. You already know that on the sea level, air weighs 14.7 psi or pound per square inch – meaning about 15 pounds are pressing down on every square inch of you.

How much does the atmosphere weigh?

Why is the air pressure low on top of a mountain?

If you think of the atmosphere as the sea, you will easily see you live in the ocean on deep. I mean, deep in the atmosphere. For this reason, the air pushes down us towards Earth’s surface. You can call it the pressure of air. We realize the air weight of 14.7 pounds per square inch which always pushes down. As you rise high from the geosphere, the air pressure will decrease gradually.

That’s why you feel the air pressure low on top of a mountain.

How much does one cubic foot of air weigh at sea level?

How much does a room air weigh?

Mainly it depends on how wet it is, what temperature, How high from the plane, etc.

Can we measure air weight?

Yes, you can weigh it on a scale. Read the first part of this article. Here I am sharing a brief technique.

How many atmospheric pressures are at sea level?

What does 1 Litre of air weigh?